Light, as we are familiar from everyday experience, can have very different properties depending on how it is created.  For example, sunlight has a different distribution of wavelengths to artificial light, such as from fluorescent or LED lighting.  Laser light, is also special in that it is monochromatic, i.e. it has only one wavelength in its output.  Even monochromatic light such as lasers can have different states depending on how it is created.  Light that comes from lasers are very close to an ideal sine wave.  For this reason, laser light is thought to be “classical” in the sense that no peculiar quantum mechanical features such as entanglement are present. 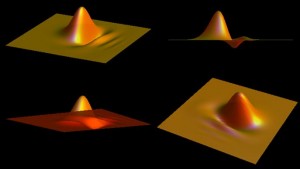 The light is produced in a semiconductor structure as shown in the below figure.  The structure shown, called a microcavity quantum well, allows for particles called “exciton-polaritons” to be excited within the regions marked as red.  When a sufficient number of the exciton-polaritons are created, a phenomenon called Bose-Einstein condensation can be made to occur.  In Bose-Einstein condensation, the particles spontaneously form coherence, which means that their underlying wavefunction all become phase coherent.  Once the exciton-polaritons become phase coherent, they leave the semiconductor by emanating through the top of the structure.

The light that escapes from the structure has a peculiar nature: they are all phase coherent because due to the Bose-Einstein condensation, but they simultaneously repel each other, because of the interactions between the exciton-polaritons.  This is quite different to laser light, which are completely non-interacting, so that the photons do not feel each other’s presence.   This makes for very different light characteristics between the new device and a standard laser.

Previous methods of producing such non-classical light relied on probabilistic methods:  they would only work part of the time, and fail with some probability.  In this invention, the light emerges continuously, just as in a laser where it is switched on and light emerges.   This should help future quantum technologies, which rely on the use of such non-classical light.